Deep-Jewels bantamweight champion Yoko Higashi knocked out Titapa Junsookplung at New Pier Hall in Tokyo on Wednesday. She extended her winning streak to four fights against the inexperienced Thai.

Junsookplung lost her pro MMA debut, getting submitted by Rin Nakai at Deep-Jewels 26 and hasn’t fought since. She was chosen to face the champion in the main event despite never having won an MMA fight.

The Japanese fighter dragged her opponent to the ground in the first stanza and landed some ground and pound. The Thai scored with a jab cross later in the round as Higashi slammed her head first into the canvass.

Junsookplung has a background in Judo, but that didn’t deter Higashi from looking for the takedown. The Thai was able to sprawl and prevent a double leg early in the second round, but her opponent persevered with a single leg before eventually getting the fight to the floor with a throw. Higashi soon had the inexperienced Thai in a crucifix and started to unleash the ground strikes. Higashi continued to rack up points as she looked for a keylock submission before returning to good old fashioned punches to the face.

The That fighter caught Higashi with a right hook in the third but soon found herself on her back and again locked up in a crucifix. With both her opponent’s arms wrapped up, Higashi rained down punches from top position.

Junsookplung was trapped and the referee called a stop to the contest at the 2:12 mark. Higashi climbs to 8-2 with a routine win over an overmatched opponent while her opponent drops to 0-2 and probably shouldn’t be getting matched up with the division’s elite at this stage. 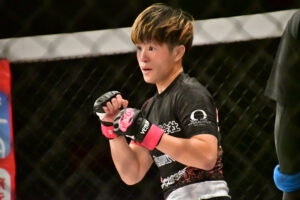 Best of the rest

Former Deep-Jewels strawweight champion Miki Motono (8-3) got the unanimous decision against Moeri Suda (7-4) in a co-main event which was much better matched. The experienced fighter spent too much for the teenager with all three judges seeing the fight in her favor.