There are pivotal moments in each phase of a coach’s challenge. The initial goal swings momentum to the scorer. The challenge has a clear winner and a closer. The potential delay of game penalty as a consequence of each lost review can end in a power-play goal, only adding insult to injury to the team that lost each step of the way in this process.

That is why the decision on whether to challenge a play, or not, carries so much weight – especially in the postseason.

That weight may have been a factor in the Oilers’ decision not to challenge Gabriel Landeskog’s score that pulled Colorado within one.

Had Edmonton challenged and lost, they would have faced a Colorado power play that not only beat them already in this win-or-go-home Game 4 but made them pay for a lost challenge earlier in the series. It would give the Avalanche an advantage that could potentially allow them to tie up the score.

Obviously, there’s the potential reward of wiping a goal off the board and maintaining a two-goal lead for Jay Woodcroft and the Oilers. But Edmonton had already gone 0-for-2 on challenges in the postseason, with one goalie interference loss. Around the league, those challenges have been particularly tough to win with a collective .250 win percentage in the playoffs.

That’s the risk of using a coach’s challenge. The idea is to promote efficiency, especially in the playoffs which inspired its implementation in the first place. But when plays aren’t egregious or are open for interpretation, it’s tricky to predict what the final outcome might be – and how much momentum can be gained or lost from it.

The 2021-22 season was actually the first complete 82-game schedule since the rules for the coach’s challenge were adjusted. Originally, these rules were implemented for 2015-16 after Nikita Kucherov scored an overtime goal on an offside play.

The only applicable scenarios were to overturn an on-ice call for a score that was either preceded by an offside play or influenced by goalie interference with conclusive evidence. Only one challenge per game was allowed and was permissible if a coach still had their timeout (that was lost with a failed challenge).

Since then, tweaks have been made to the process and the rules – from the benches being equipped with iPads before the playoffs to ensure there was consistency in replay technology, the addition of blue line cameras, to a delay of game penalty for lost offside challenges ahead of 2017-18. As a result of that latter change, there were fewer offside challenges (59) and fewer losses (a .622 win percentage up from .325) compared to 2016-17.

More change came ahead of 2019-20. Timeouts are no longer needed to challenge, and coaches aren’t limited to one per game. But every single failed challenge results in a delay of game.

Missed stoppages were also added to the list of challengable offenses after another controversial playoff goal.

In the first year with those changes, even though the season ended about a dozen games earlier than usual, there was still a clear downswing in the number of challenges around the league. The same is true for 2020-21, even when accounting for the condensed 56-game season.

But even more noteworthy than there being fewer challenges, despite teams not being limited to one per game, was the uptick in efficiency. There was a jump in win percentage of over 20 percent between 2018-19 and 2019-20, and that only increased since the regular season. 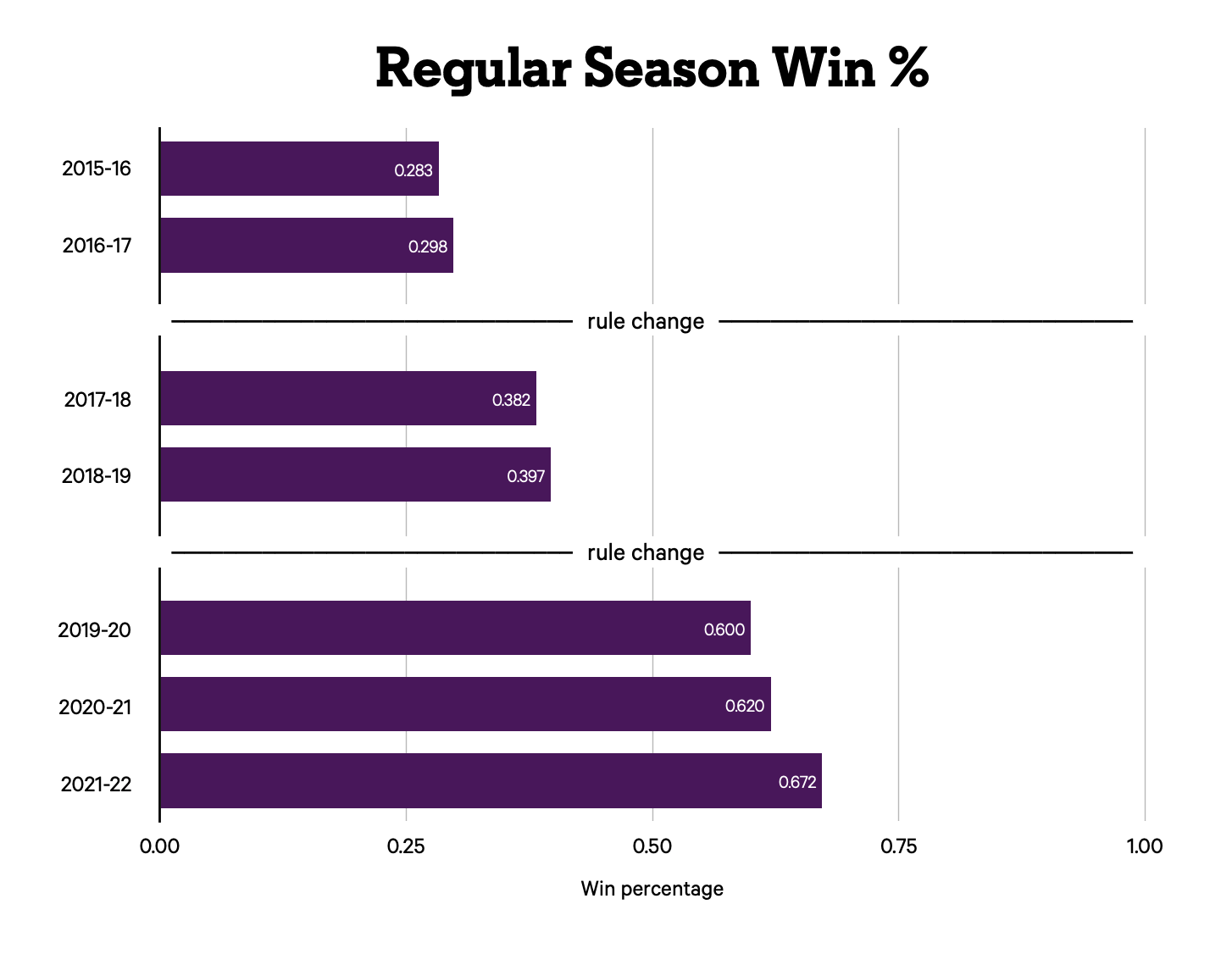 There’s been a learning curve for head coaches, assistants, and most importantly video coaches over the years that helped streamline the process. But with the addition of a penalty, there’s more risk associated with a lost challenge. Most coaches aren’t throwing everything at the wall and hoping it sticks anymore. Just look at Gerard Gallant who was very liberal in requesting goal reviews, peaking at 17 in a single season with a 6-11 record. His philosophy shifted when there was a penalty for those losses, no longer challenging plays where he knew the team “had no chance” of getting the score overturned. This year, the Rangers’ bench boss went 4-0 in the regular season.

In Pittsburgh, Mike Sullivan is another prime example after leading the league with a 7-0 record this season. His worst year came in his first full season behind the bench in Pittsburgh with a 3-10 record, but he steadily improved over the next two years. Since the rule change in 2019-20, he’s been perfect in the regular season, going 11-0 over the last three regular seasons.

This past year, Jon Cooper accumulated the most losses with four (although he did not have the lowest win percentage – that honor belonged to Lindy Ruff in New Jersey). In 2018-19, 16 coaches had upwards of four losses to their names, with three more than doubling that.

There, of course, are exceptions – Jeff Blashill has always been a frequent challenger with 16 per year in three instances. While most coaches aren’t requesting as many reviews now, Peter Laviolette challenged a career-high 10 goals this past year to lead the league, after challenging zero plays over the last two regular seasons.

How have these trends affected each type of challenge?

Offside plays have had the consequence of a minor penalty longer, and there’s a clear trend up in win percentage since then. For goalie interference, there’s been an uptick in win percentage since the addition of a penalty for losses just not to the same degree. The gray area of ​​the rule likely has a lot to do with that since decisions can be more subjective than offside plays or missed stoppages.

That gray area can be particularly controversial in the playoffs.

Postseason data presents its own hurdles. The 16 teams who make it do not play the same number of games in the playoffs, and there’s no set number of league-wide games there has to be each year either. Plus, the pool of who can challenge shrinks – maybe those who are most willing to take the plunge and request review do not make it at all some years, but are in the playoff hunt in others.

Still, even with that context in mind, the number of challenges has been reduced since the latest round of rule changes. 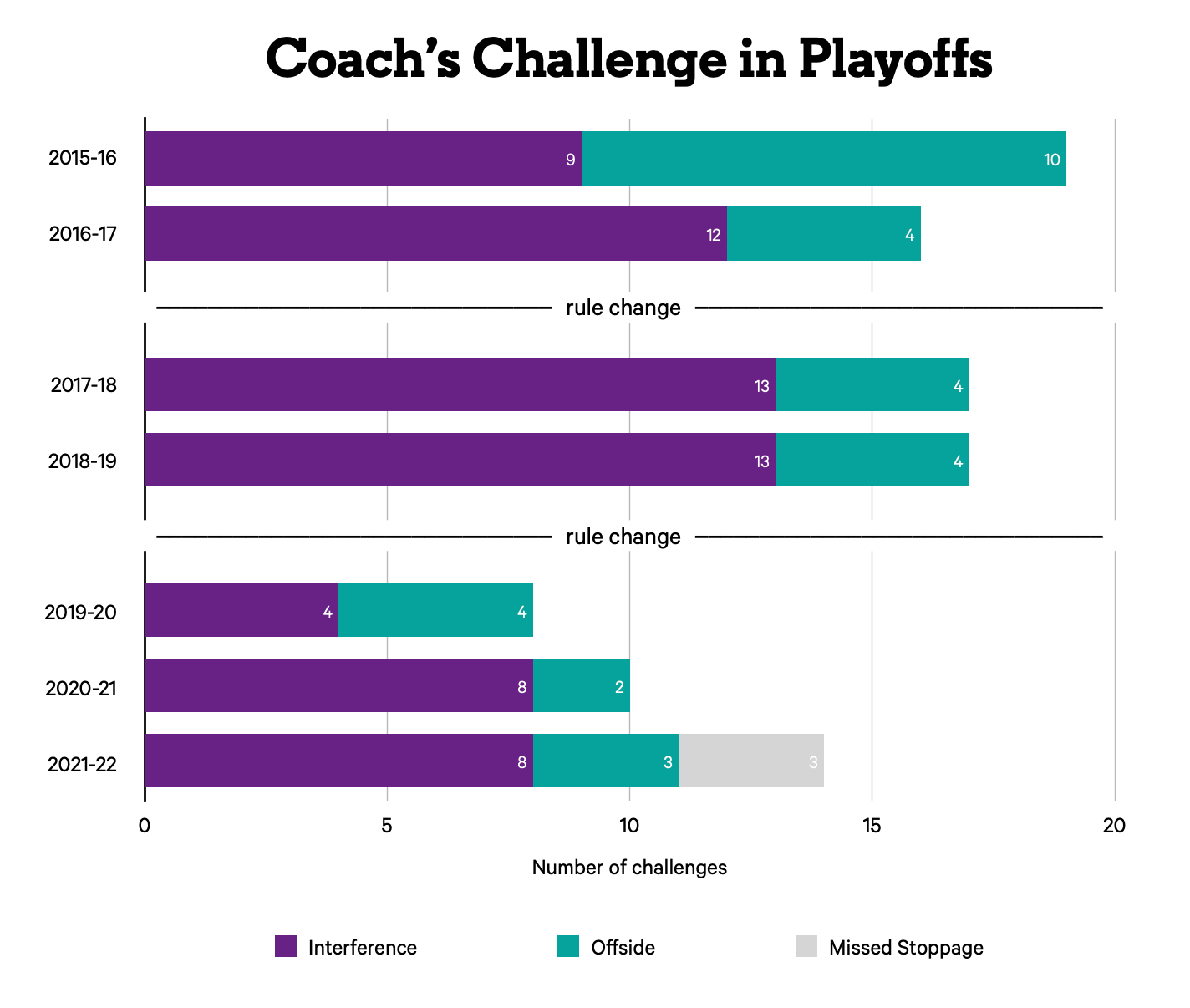 While there have been fewer challenges, there hasn’t been that same upswing in efficiency as there’s been in the regular season. That’s what’s so interesting; the high-pressure environment calls for calculated decisions that won’t have the consequence of going short-handed and yet that’s how many end up when they request a challenge. On the other end of the thought process being the decision to challenge in the postseason, there’s more desperation to swing momentum and even more riding on each goal which could be what inspires a challenge in the first place – even if there’s less of a chance of it being right. 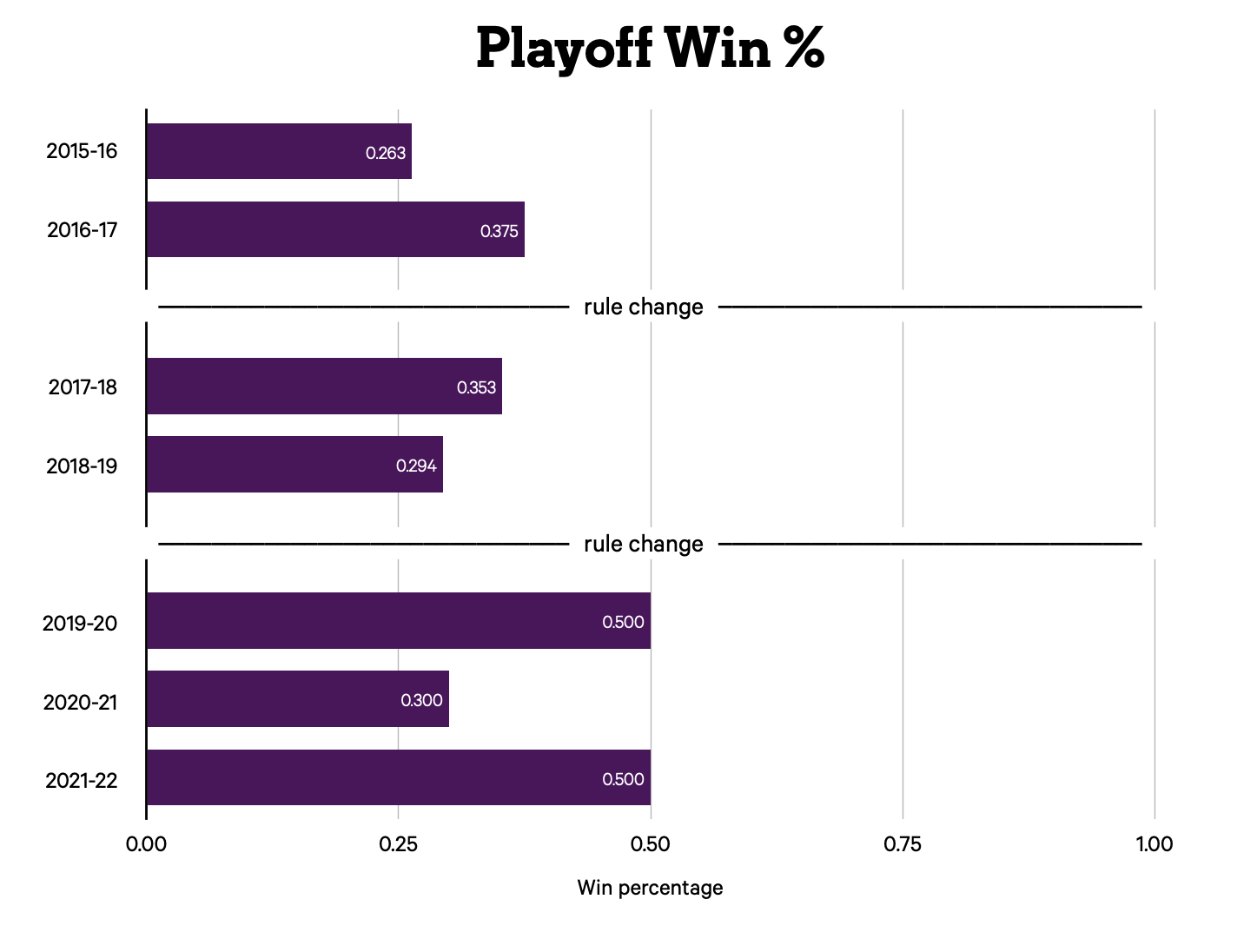 Is there one type of challenge bringing the overall win percentage down from the regular season? It’s not missed stoppages – there’s only been three since being added to the rule book, all of which took play this spring and overturned goals. Offside calls really aren’t the problem, either; those have been above .500 each year.

The challenge with the lowest success rate is unsurprisingly goalie interference, the most disputed call of them all.

That holds true in the 2022 Stanley Cup Playoffs.

This year, there’s been 14 postseason challenges. Seven goals have been overturned: three for missed stoppages, two offside plays, and two for goaltender interference. An equal seven goals have been upheld. While one was for offside, six have been after goalie interference was reviewed. Of the seven goals to be upheld, four teams have also conceded a power-play goal on the corresponding delay of game – the Oilers, Predators, Hurricanes, and Panthers.

Small samples come into play here, but there’s less of a common thread on whether regular season challenge success trickles into the playoffs versus one type of challenging weighing down the average. 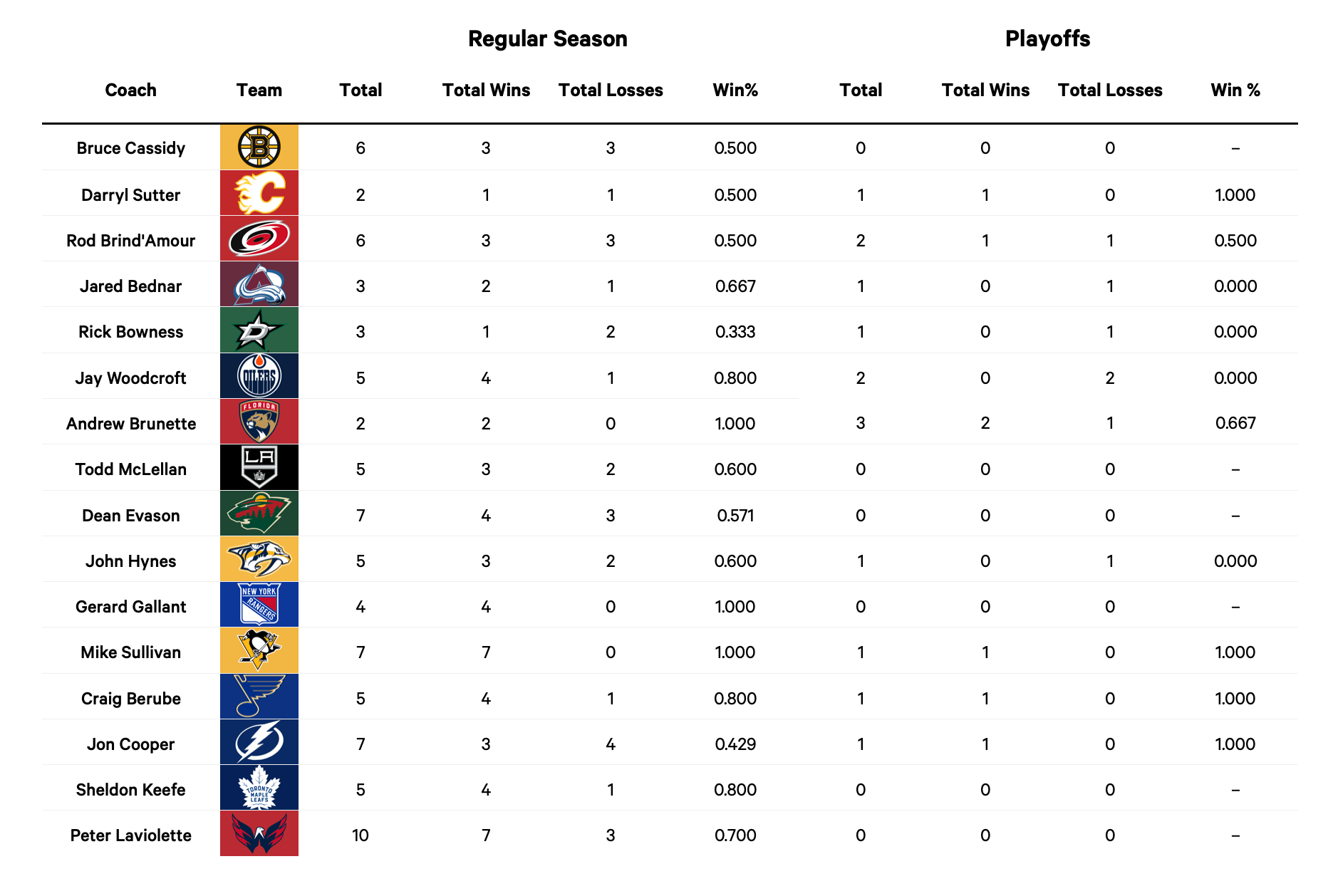 Woodcroft went 4-0 on offside calls in the regular season and yet went 0-1 in the playoffs. Laviolette did not challenge a play in six games after having 10 through 82 tilts. Mike Sullivan remained perfect, going 1-0. There’s really only so much to draw on how the proficiency of a coaching staff in the review process trickles from regular season to playoffs, versus looking year-to-year in the regular season.

The idea behind the coach’s challenge is to ensure the right calls are being made, especially when there’s egregious mistakes in real time. As rules have evolved to narrow usage, there’s been progress in success rates in the regular season but not enough across the playoffs.

Considering this was the time of year that made the decision to have coach’s challenges in the first place, the efficiency his time of year should be all the more important. So is the fact of how impactful these calls can be on momentum swings within a game, and series, when there’s a ticking clock on every passing season.

The playoffs should once again be an influencing factor on how to keep improving, but not on the rules regarding the challenge process itself. Instead, it should surround the gray areas of goaltender inference that keep sinking the progress the challenge process has made by raising the stakes when a coach decides to review a scoring play.

Data via BehindtheBenches and Evolving-Hockey.