F1 stud Lando Norris is one of Britain’s hottest prospects on the grid and is already an accomplished driver.

Norris signed with McLaren as a junior driver and is now arguably their No. 1 speedster ahead of Daniel Ricciardo.

But the 22-year-old has yet to win an F1 race in his bright orange car, and will be looking to do so for the first time when the current season resumes.

And one person he’ll have cheering him on from the paddock is his girlfriend Luisinha Oliveira. 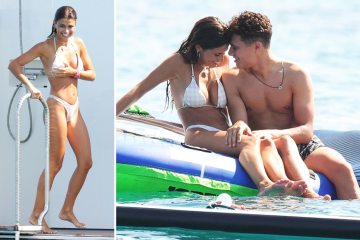 She’s a model based in Portugal, where she was born, and is reportedly managed by Central Models, an agency in her home country.

Oliveira has over 450,000 followers on Instagram and has amassed millions of likes on the social media platform.

Her father is Portuguese businessman Adriano Oliveira, and her mother is called Raquel.

Oliveira also has a sister called Beatriz and a dog called Cookie.

It is not known how long Oliveira and Norris have been together, but it has been public since January 2022.

Norris posted a picture of the pair on Instagram from a holiday in Dubai and captioned it ‘My sunshine’.

Oliveira can often be seen walking with Norris through the paddock on F1 race days and is one of his biggest supporters.

The pair aren’t married and they don’t have any children together.

But Norris and Oliveira recently enjoyed another holiday together, as they hung out on a yacht in Ibiza with each other.