SOCCER AID viewers were left in hysterics after spotting Jamie Carragher’s X-rated reaction at being roasted by Usain Bolt.

The pair squared off on Sunday as the Rest of the World beat an England XI on penalties.

One hilarious incident in the game saw Carragher chop down Bolt to stop him breaking through on goal.

But the world’s fastest man did manage to get the better of the Liverpool legend later on.

Bolt turned Carragher before sprinting away from the ex-England defender.

However, the Jamaican was unable to sort out his footwork, letting Carragher off the hook. 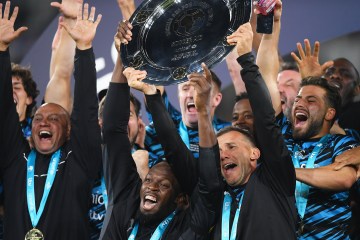 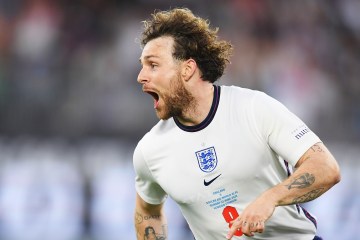 And the Merseyside favorite was seen smiling before saying: “F ***** g hell.”

This prompted a flood of Twitter reaction, with the general public finding Carragher’s response highly amusing.

Another wrote: “Wonder if you can lip read what Jamie Carragher is saying here after Usain Bolt lost him.”

Most read in Premier League

Another gasped: “The Carragher Vs Bolt foot race is going to be a thing of beauty all evening.”

One declared: “Just turned on the telly and Jamie Carragher is marking and matching the runs of Usain Bolt, how is this not box office pay-per-view.”

Another laughed: “Carragher saying ‘f ****** hell’ after chasing Usian Bolt & clearing the ball. Its worth noting, before chasing, he was 10 yards infront.”

One added: “Carragher saying f ****** hell after just about catching up with Usain Bolt.”

As for the game, it was the Rest of the World who took the lead after 20 minutes when Chunkz brought down Patrice Evra.

The penalty was calmly converted by Noah Beck.

But England leveled the score just before half-time when Chunkz won a penalty up the other end.

Mark Wright took his goal well before Tom Grennan put England ahead just moments into the second half.

But Kem Cetinay made it 2-2 with an equaliser for Rest of the World with half an hour remaining.

Neither side could find a winner in the remaining time.

And the game then went to penalties, with Grennan’s joy turning to misery as he missed England’s first attempt.

Russell Howard also fluffed his lines as Lee Mack netted the winning penalty for the Rest of the World, with the final spot-kick score 4-1.