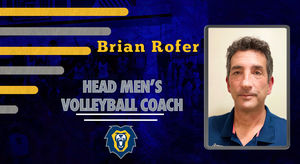 COSTA MESA – Vanguard Athletics announced Thursday that Brian Rofer has been named the head coach of the men’s volleyball program.

Rofer takes over for Eric Vallely, who will remain with the team as an assistant coach.

Rofer brings extensive coaching experience to the Blue and Gold, having spent 22 years as the top men’s volleyball assistant at UCLA. Most recently, he has served as the assistant boys coach at Loyola High School in Los Angeles. He also has strong connections to the club scene with his involvement the last five years as a consulting coach for Manhattan Beach Surf Volleyball.

“We are incredibly excited to welcome Brian Rofer to the Lions Family,” said Director of Athletics Jeff Bussell. “Brian has experienced great success in these 20-plus years of coaching at the highest level. He is a winner in every aspect. His coaching abilities are exceptional, but he is also an incredible educator of young men. Brian and Coach Vallely already have an established relationship and will mesh well together as they lead our program. We look forward to the impact Brian will make on and off the court.”

A 1982 graduate of UCLA with a degree in Psychology, Rofer was named the American Volleyball Coaches Association Assistant Coach of the Year in 2012. He helped mentor 33 All-Americans and 72 all-conference players in the Mountain Pacific Sports Federation. The Bruins compiled an impressive record of 486-179 with Rofer on the bench.

“I am truly blessed to be able to join this team of highly motivated and talented student-athletes,” said Rofer. “This group has the matter-of-fact potential that can culminate in our seniors leaving behind a legacy of champions and a tradition of success to be built on. I want to thank Mr. Bussell for his trust and for this opportunity. It is an honor to be part of the Vanguard community. Go Lions!”

Following his long run at UCLA, Rofer transitioned to Loyola High School in 2015. He led the junior varsity program to a league championship, and the varsity team to a CIF title and CIF regional title.

Prior to joining the UCLA staff, Rofer served as head coach at Edison High School in Huntington Beach in 1990-91. He earned Orange County Coach of the Year accolades.

Rofer lettered for Scates from 1978-80 as a middle blocker, playing with former UCLA All-Americans Sinjin Smith and Karch Kiraly, among others. He was a member of the 1979 NCAA title team that finished 29-0.

The Lions return four starters from last year’s team which finished 17-7 overall and qualified for the NAIA Championship.