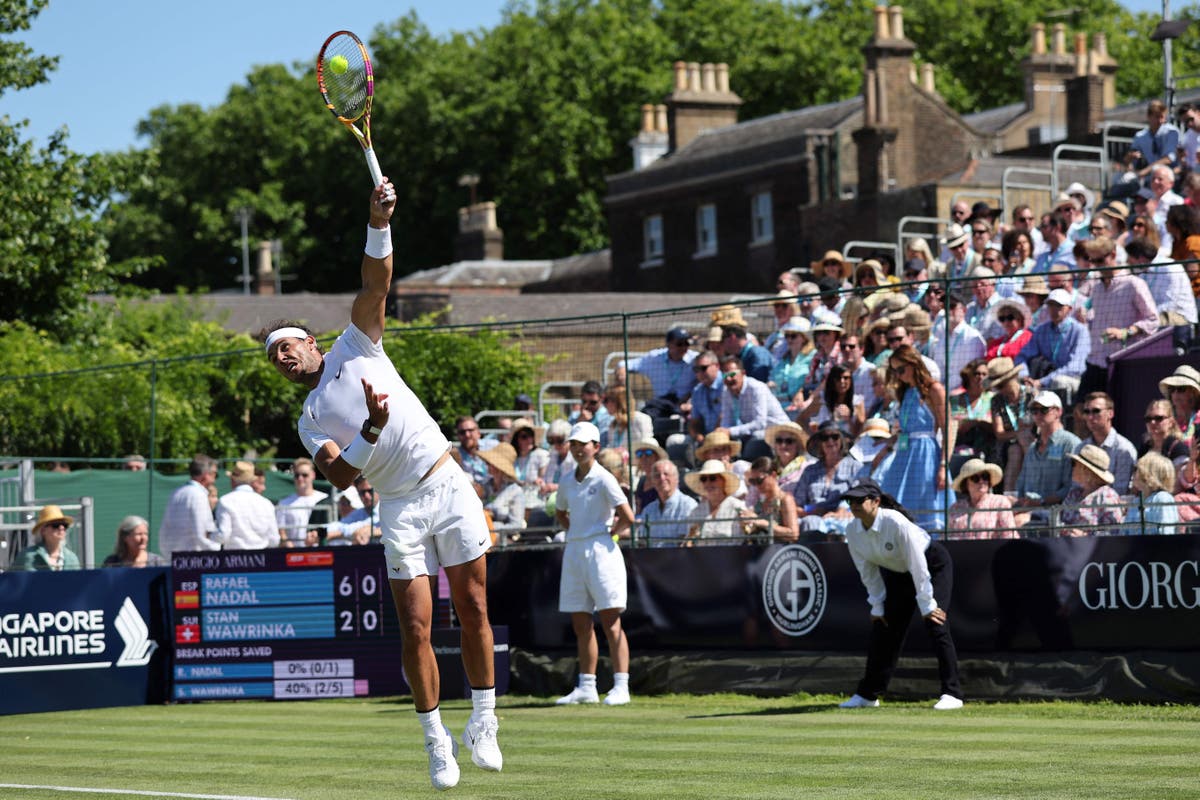 Nadal confirms he intends to play at Wimbledon

Rafael Nadal returns to the grass court for the first time since 2019 this afternoon in an exhibition match against Stan Wawrinka at Hurlingham Club in the Giorgio Armani Tennis Classic.

Nadal was a major doubt for Wimbledon after foot problems following his French Open victory in Paris, but in choosing to play at Hurlingham has signed his intention to return to the All England Club later this month. The 36-year-old has already triumphed at the Australian and French Opens, is halfway to a calendar Grand Slam in 2022 and will be using the exhibition matches at this week to prepare for the next major of the year.

Novak Djokovic is also in action and his match against World no. 9 Felix Auger-Aliassime will follow Nadal vs Wawrinka. Djokovic has not played since losing to Nadal in the French Open quarter-finals and is also looking to prepare for what would hopefully be a lengthy Wimbledon campaign by participating at Hurlingham.

Nadal and Wawrinka are due on court from 2:30 pm with coverage being live streamed on the Giorgio Armani Tennis Classic Facebook channel and website.

Follow all the action from Hurlingham Club as Nadal prepares for Wimbledon with an exhibition match against Wawrinka:

Rafael Nadal defeated Stan Wawrinka 6-2, 6-3 in a straight set victory at the Giorgio Armani Tennis Classic at Hurlingham Club as part of his preparations for Wimbledon.

Nadal barely moved out of second gear against the three-time major champion who is recovering from a foot injury that kept him out of ction for most of 2021.

Still, Nadal showcased some fine form, utilizing his powerful forehand and making use of tight angles for drop shots as he came to terms with the grass court. Wawrinka showed how effective his serve is with a number of aces leaving Nadal rooted to the baseline but the Swiss will need to find an extra gear ahead of Wimbledon.

Nadal wins the match! Three powerful serves at 15-15 see him close out the exhibition game in style.

A handshake with Wawrinka and a wave to the crowd come from the French Open champion who gratefully accepts the applause.

Nadal threatened a recovery with a blinding forehand down the line from Wawrinka’s serve but he had too much to do in that game and the next point goes the way of his opponent.

He’ll now be serving for the set.

It’s been a while but Nadal sees out his service game to love and claims the game.

After a short rest Wawrinka comes flying out of the blocks and rattles off three points in a row to quickly move 40-0 up.

That is naughty. Nadal picks up the first point of the next service game before sprinting to the net to return a drop shot. He gets there in plenty of time opens up his body as though he’s just going to flick it over the net before turning his wrists on the shot and whipping it to the other side of the court. Beautiful.

Nadal is more cautious against the serve and focuses on keeping the ball in play. He gets his chances to pick up points and takes them both along with the game.

Another break for the Spaniard.

What a shot from Wawrinka! Nadal forces him into the corner with consecutive forehands and pushes up to the net expecting the chance to win the point. Instead Wawrinka stretches low to his left and belts the ball over the net for a passing winner!

Nadal tries to be too cute with his angles and repeatedly sends the ball out of play. Wawrinka works his way up to two break points but only needs one and immediately gets back the game he just lost.

Nice fightback from Wawrinka who makes it to deuce. A couple of mistakes from the Swiss are all Nadal needs to work the next two rallies in his favor and completes the break of serve.

Even better! Nadal sweeps the first three points off Wawrinka’s serve but goes long with his first attempt to break. Two more chances to take the game.