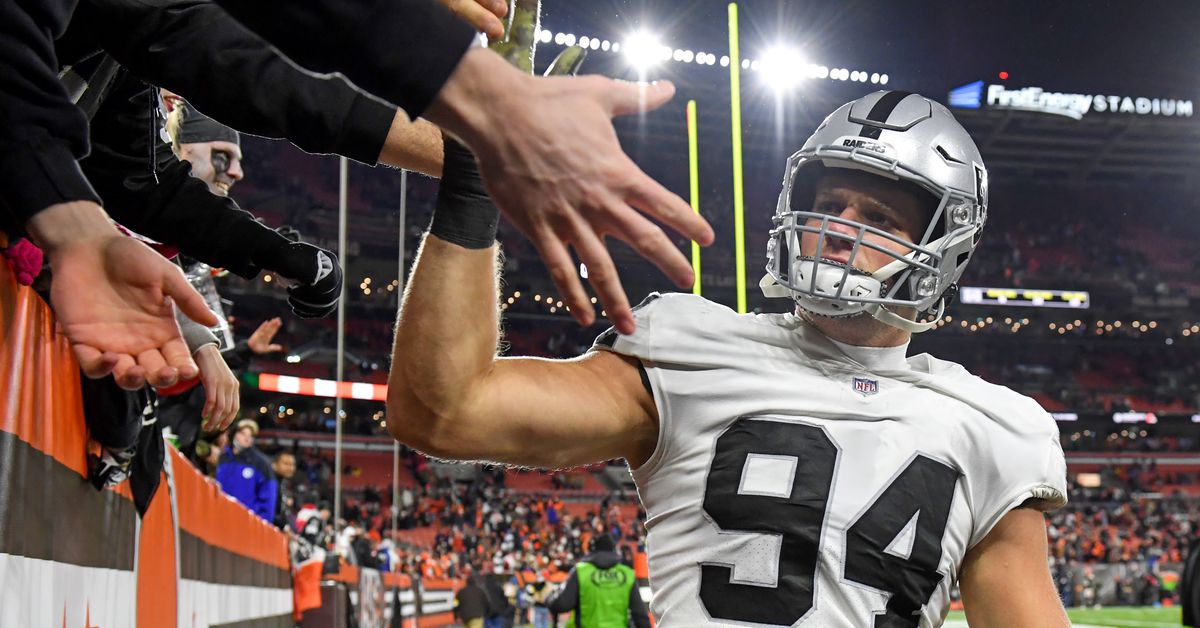 It was exactly one year ago on a quiet Monday afternoon in the NFL when an unassuming Las Vegas Raiders’ backup defensive end made league history.

In a short, simple Instagram post, Carl Nassib announced he was gay, becoming the first active player in NFL history to be out publicly.

It immediately became world-wide news and Nassib’s story transcended sports. His jersey quickly became a leading seller in the league.

The biggest impact it had, though, was when the season started and Nassib was just another player. His story quickly slid to the background. I was worried that Nassib would be known and referred to as “the gay NFL player.” But that was never really the case.

He fit in like he did in his first five NFL seasons when he was known only as a hard-working rotational pass rusher from Penn State. He was just one of the guys in the Raiders’ locker room. He received public support from several teammates and there were never any stories or reports of negative treatment or remarks by fans or by opponents. Even during the Raiders’ game for the most part, Nassib was talking about his play on the field.

It was a seminal moment in football, and in all of professional sports, really. Nassib showed the world (and, most importantly, other athletes who are grappling with the idea of ​​coming out publicly) that it can be done painlessly.

Now comes an important test for the rest of the NFL. Some team needs to give him a job. The league, to its credit, celebrated Nassib and supported his favorite cause, The Trevor Project, last season.

But Nassib, 29, is currently unemployed with NFL training camps set to begin in a month. The Raiders released Nassib in March after two seasons with the team.

It was obvious that Nassib’s release from the team was a business decision. He had a contract that was paying him much more than what he produced in Las Vegas. Shortly before its release, the Raiders gave a big donation to The Trevor Project.

However, Nassib deserves to be on an NFL roster in 2022 somewhere, assuming he still wants to play. He’d be a minimum-salary player after compiling a total of four sacks the past two seasons. He has 22 sacks in six NFL seasons.

The fact that Nassib has been a free agent for three months is not worrisome yet. There are several players in the same boat. But if it comes to September or so and Nassib does not get a chance somewhere or even a visit or workout, then it will become an issue for the league.

It’s easy to celebrate a player when he is on a team, but if the league bypasses Nassib from this point, it will be a problem.

Last year showed that there were no distractions by his decision to come out. It was good for the league. It has been proven that there is no downside to a team that has an openly gay player on its roster. No other current NFL player has come out since June 21, 2021. However, the odds are Nassib is not the only gay player currently in the league.

One thing that stuck out during Nassib’s appearance on Raiders’ teammate Darren Waller’s podcast last September was that he said he wanted to come out long, but wanted to do it after he became financially secure. In 2020, Nassib signed a three-year, $ 25.25 million deal with the Raiders with $ 13.25 million in guaranteed money. I read Nassib’s comment as if he wondered if it would be difficult to get a job in the league as an openly gay man.

If Nassib doesn’t end up getting a job, it could discourage other gay players. That would have been an unfortunate step backwards after everything that had been achieved by Nassib’s announcement last summer.

As we sit here on an important anniversary, let’s hope the Carl Nassib football journey isn’t over for many reasons.