Colorado’s Charlie Blackmon was the first MLB player to land a deal with a gambling company.MaximBet

The MLB Players Association‘s business arm is in discussions with sports betting companies about potential partnerships now that players are allowed to enter into such agreements under the new collective-bargaining agreement.

“I think we will do at least one deal, if not more than one,” Evan Kaplan, MLB Players Inc. managing director, said last week. He would not put a deadline on it, but said he is gathering information and gauging interest from different sports gaming companies.

The CBA, which ended the MLB lockout in March, contains a new provision that allows players and the union to take advantage of the explosion in sports betting companies and other opportunities through corporate partnerships.

“One of the objectives in the current CBA was to open up gambling sponsorship opportunities for players,” Kaplan said. “We saw how the leagues and the teams were able to create opportunities and monetize the category and we felt that players should have the same opportunity. When we reviewed our feelings on the matter with MLB, they understood it. ”

What players can do is similar to what the league and clubs have been doing for years, Kaplan said. “If you go to Dodger Stadium and there’s a sign that says a gambling entity of the Los Angeles Dodgers, the players can do something similar.”

Like the name, image and likeness market opening up last summer, this is a new category, and nascent opportunities fuel many questions. Kaplan has been fielding questions from agents scrambling to learn as much as they can about it, he said. “There’s a lot of nervousness about what they might or shouldn’t do.” 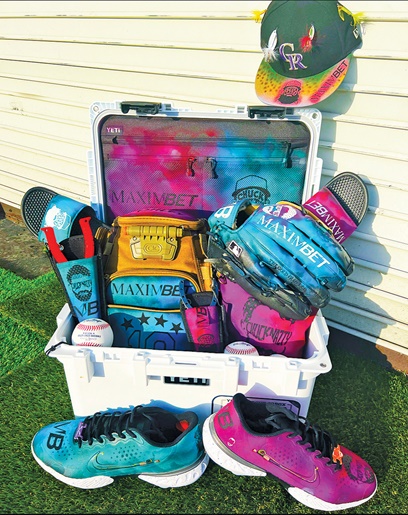 For example, agents are wondering if a player can wear a shirt with the name of a gambling company in public. “The players can do anything as long as it doesn’t promote betting on baseball,” Kaplan said.

When and if the union agrees to a partnership or partnerships with companies – there’s a possibility they could, for example, have a mobile app partner and a brick-and-mortar partner – it won’t in any way interfere with an individual MLB player’s ability to sign a marketing deal with a sports betting company, Kaplan said. “We work for the players, not the other way around,” he said.

Colorado Rockies outfielder Charlie Blackmon became the first MLB player to take advantage of the new provision in the CBA by signing a one-year partnership with MaximBet, an online gaming company.

“It’s historic,” he said Doug Terfehr, MaximBet vice president of marketing. “It is obviously exciting and rewarding to be the first, but it wasn’t the goal. The goal was to identify the right person for us to partner with and as we looked around at people who could potentially help us in our original market, which is Colorado, someone who sticked for many reasons was Chuck Nazty, ”he said, referring to Blackmon’s nickname.

“He’s got a great big name, great personality, played his entire career there and if you’re a sports fan in Denver and the state of Colorado, you know who Charlie Blackmon is and you love him,” Terfehr said.

MaximBet launched in 2021 in Colorado as its first state for online gaming. The company has access to roll out its product in 11 additional markets, including US states and the Canadian province of Ontario. Terfehr said he is getting a lot of calls from agents since the news of the Blackmon deal and other endorsers are a possibility.

Peter Pedalinoattorney, MLB agent and one of the principals of ACES, represented by Blackmon in the first-of-its kind deal for an MLB player. Pedalino did not share financial details, but said Blackmon would donate a portion of the proceeds to charity. Blackmon will make appearances, do a photo shoot and send tweets on behalf of the company, Pedalino said.

“We were very stringent on the language,” Pedalino said. “He will not promote gambling at all. He will promote Maxim as a company, but not gambling, at all. ”

It’s not the first time ACES has broken ground on new deals. It negotiated an equity deal for former New York Mets third baseman David Wright and Vitaminwater in 2006 that netted Wright millions when its parent company Glaceau was sold to Coca-Cola Co. in 2007.

Pedalino predicts there will be more deals for major league baseball players and sports betting companies. “So there are going to be a lot of these deals. They are going to come flying in. It’s an untapped market. ”