The NHL is taking its own shot at replicating the magic of Wordle, the free daily social word game that was acquired by the New York Times and has spawned dozens of derivative versions.

Green tiles represent correct information; yellow indicates a close guess, meaning within three of the player’s points or goals or within one of his Cup wins; arrows show the directionality of an incorrect attempt. For example, a guess of Bruins forward Patrice Bergeron on Monday returned green for team, division and position and yellow for Stanley Cup wins. Next to Bergeron’s 65 points and 25 goals were up arrows, and his one Cup win had a down arrow. From that information, one could glean that the correct player was David Pastrnak—Also a Bruins forward but with 77 points, 40 goals and zero Cup wins.

“The goal is to give avid hockey fans something fun to play when they wake up, to get excited for the Stanley Cup games every day, but also help us build awareness and affinity for our players,” says NHL CMO Heidi Browning.

SharpLink Gamingwhich began collaborating with the NHL a dozen years ago, developed Stanley Cupple over the past month. Previously, SharpLink had created the Hat Trick Challenge, and it also produced the current bracket challenge. The company is listed on the NASDAQ stock exchange and has worked with Quintar to develop a PGA Tour betting platform and with March Madness Liveamong other projects.

Upper Deck signed on as titular sponsor. Those who scan a QR code on the game page receive a free Upper Deck e-pack with digital trading cards.

Browning adds that the league spent time crafting a user interface that had enough appeal for the diehards while also being accessible to casual fans. “We wanted to make it just hard enough, and we also wanted to make it so that new fans could come into the game, learn what they can about their favorite players that they’re seeing as they watch the Stanley Cup,” she says . 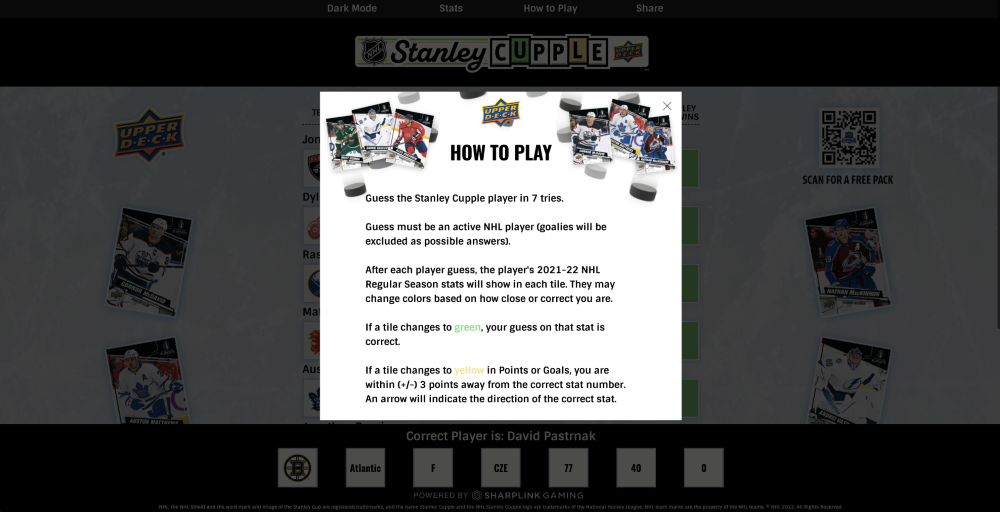 That’s especially paramount now when there’s an uptick in interest. “As you know, when you have your playoff season, that’s when we expand our audience considerably,” Browning says. “You have a whole group of plans of fans that are playoff hockey fans. And this is devised to inspire and educate them on our players as well. ”

Much like Wordle, there’s no registration required for fans to play Stanley Cupple. Cookies in the browser save guesses and a user’s playing history. The guessing mechanism is forgiving about spelling, too, with close matches suggested. “The barrier to entry is zero,” he says SharpLink Gaming COO Chris Nicholas. “I mean, you’re there, and you can start to play and pick.”

We wanted to make it just hard enough, and we also wanted to make it so that new fans could come into the game, learn what they can about their favorite players that they’re seeing as they watch the Stanley Cup.

Its formula of combining player names, demographics and stats together could easily be replicated for other hockey games beyond the Stanley Cup playoffs and even into other sports.

“It definitely could evolve with the NHL,” Nicholas says. “It could evolve into other sports, certainly. I like it because it’s got that little trivia field that can be applied to a season, a postseason, a big event. So it really is an engine that can work with almost any sport and any kind of timeframe. ” 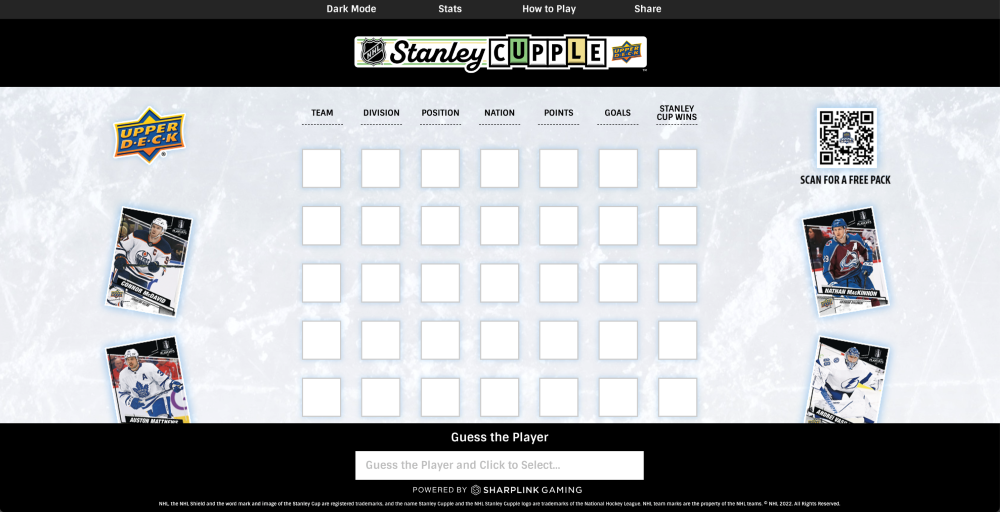 The way the NHL hopes fans will start their days during the playoffs: a blank slate of Stanley Cupple.

Browning says the league will begin to promote the game more this week and will monitor the usage data to see how the premise could be spun into other variations. Thinking out loud on the possibilities, she notes that the NHL Draft is not too far away, and this game architecture can easily be converted into a way of promoting top prospects.